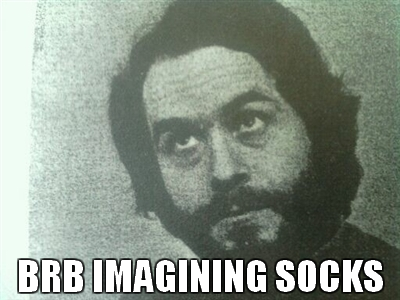 A lot of people have fetishes ranging from kinky sexual fetishes to random, bizarre fetishes.  I’ll leave you to decide which Bundy’s main fetish (aside from necrophilia) was.  Bundy was obsessed with clean, white socks.  Yes, really.  He notes in the book, “Ted Bundy: Conversations with a Killer,” that “Socks are such a serious part of my life.  They’re so very important to me.”  Bundy loved the fact that he “possessed” so many clean white socks that he was proud when his possessions were read out in court & his socks were mentioned during the proceedings.  In fact, the movie, “Ted Bundy,” (starring Michael Reilly Burke), has a shot of a sock drawer full of white socks, rolled up & in perfect order.  Bundy often changed his socks 3-4 times a day.  He constantly purchased new socks with stolen credit cards.

From prison, Bundy also said, “I’ve got a sock fetish.  No question about it.  I must have six or seven pairs right here with me in my cell.”  What’s really interesting about this obsession is that Bundy enjoyed the “possession” of the socks, which is a word he often used when describing his victims.  Bundy needed to possess, he needed something to own.  People were objects to Bundy, just like socks.  Sure, that’s a simplification of something much more complicated, but I don’t think it’s difficult to make the connection.  Clearly this fetish was a substitute for the possession of a woman’s corpse.  Everything about Bundy was based on the idea that what he wanted he deserved to have.

If I had to determine whether Bundy’s fetish was a kinky sexual fetish or a random bizarre fetish, I would have to say both.  Maybe that’s a cop out, but if possession is really what turns you on, I think that’s both bizarre & kinky, don’t you?