[Thanks to Rob T. for suggesting this topic]

In Florida, the electric chair has been used since the United States overturned its moratorium on capital punishment in 1976. Bundy committed several brutal murders in 1978 at on the Florida State campus and in Lake City, Florida. He was definitely eligible for the death penalty when taken to trial in 1979. When offered a plea deal in exchange for 75 years, he considered it. However, when he realized he’d have to plead guilty in front of a packed courtroom, he rejected the deal outright. The one thing Bundy couldn’t stand for people to think was that he had committed the murders.

When a prisoner is strapped to the electric chair, a sponge wet with saline is placed on top of the prisoner’s head. Then a metal cap with an electrode is applied atop the sponge. Once everything is in place, two separate currents of 2,000 volts each are sent through the individual’s body for several minutes. The first jolt causes unconsciousness and brain death and the second damages vital organs causing death. In recent years the electric chair has had several mishaps where the sponge wasn’t wet and the prisoner’s head caught fire. Though not actively used in Florida now, inmates can request the electric chair as their method of execution. 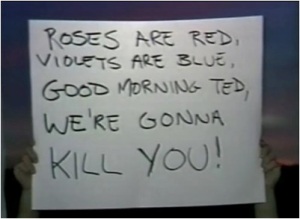 On Tuesday, January 24, 1989, Ted Bundy was prepared for electrocution after being dragged from his cell to walk “the green mile.” His head had been shaved and he was shaking as he was seated in the small room. Several relatives of his victims were waiting in a tiny room to watch him die while over 2,000 people waited to celebrate his death outside of the jail. Bundy gave his last words to his attorneys “I’d like you to give my love to my family and friends.” After he was blind-folded, the executioner (rumored to be a woman!) pulled the lever from another room to start the alternating current. After several minutes, the current was stopped and a doctor confirmed that Bundy was dead. Outside, the crowd cheered and sang while holding signs reading “Burn Bundy Burn” and “Tuesday is Fry-Day.” Inside the prison, the life of a brutal, yet broken man ended in smoke and regret.