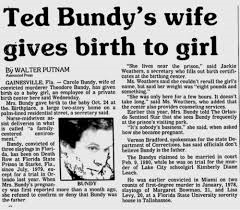 A lot of people have asked me about Ted Bundy’s daughter with his wife, Carole. Rose Bundy was born in October 1981 and was the spitting image of her father. Raiford prison does not allow conjugal visits, so a lot of people have posited theories regarding how Carole got pregnant. The most popular theory is that Bundy bribed a prison guard who allowed him to have a conjugal visit with his wife either behind a vending machine or in a bathroom. The movie “Bundy” (2002) plays out this scenario. The most plausible theory, in my opinion, came from a comment made by a Raiford prison guard. He advised that Carole passed Bundy a condom through a kiss and he passed it back the same way with his sperm in it. That strikes me as more realistic, especially coming from one of the guards who was working in that prison in 1981-82.

It seems strange that Bundy would want a family in prison after having been so reticent to have one in his earlier days. I believe there were a couple of reasons he wanted a wife and child. First, he wanted to appear normal to the general public. There was nothing more “normal” to him than a family. He even told Robert Ressler that he dreamed of having a perfect wife and perfect family before his killing spree began. Another reason was to make himself more sympathetic to those who were planning his execution in Florida.

Personally, I find it ironic that his child was a girl. Bundy admitted to killing more than 30 women during his murder days. He stole the daughters of myriad parents and here he was, the father to a daughter himself. One can only imagine what life would have been like if he had been free from that point on. 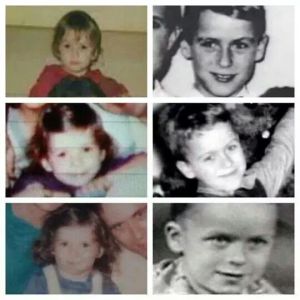 Previous to Ted’s execution, Carole left him and changed their daughter’s name. No one knows if she’s aware of her parentage, but theory goes that she probably knows some of her father’s family. It would be hard to keep this secret from her in that situation. Crime writer, Ann Rule has noted that the young woman, who would be in her early 30’s now, is doing well and succeeding in the world. In the words of the immortal Shakespeare, “A Rose by any other name would smell as sweet.”

11 thoughts on “Rose By Any Other Name”